The numbers: The U.S. created a robust 223,000 new jobs in May to push unemployment down to an 18-year low of 3.8%, signaling that a nine-year-old economic expansion still has plenty of steam despite being one of the oldest ever.

The increase in hiring — the biggest in three months — exceeded the 200,000 forecast of economists polled by MarketWatch.

In an unusual and controversial move, President Trump foreshadowed the strong employment report in an early-morning tweet in which he said he looked forward to the May jobs figures. Investors took that to mean they should expect a good report.

By and large, the reported showed an economy with plenty of vigor. Most industries added jobs and worker pay increased at a somewhat faster pace.

The unemployment rate fell again to the lowest level since April 2000 as more people found work. The last time the jobless rate was even lower was in 1969. 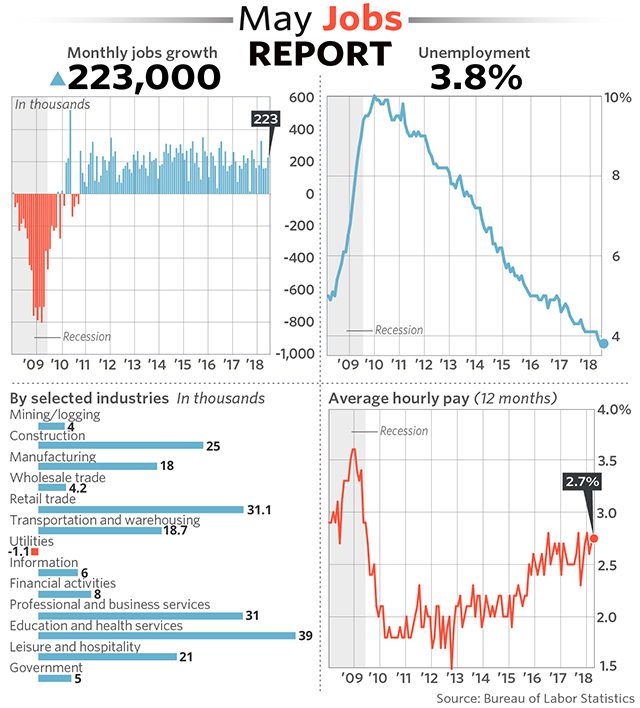 Stready hiring by construction and manufacturing companies is particularly surprising. They are the among the industries that have complained the loudest about a shortage of skilled workers.

Big picture: Companies are still eager to hire nine years into an economic expansion that could turn into the longest ever if it lasts another year. Job openings are at a record high and the biggest gripe among businesses is that they cannot find enough suitably skilled workers.

To fill job openings firms have offered higher pay and benefits to outside candidates, sought to train new or veteran employees, established partnerships with local vocational schools and, in some cases, they’ve been hiring felons.

While more Americans sure could use a bigger raise, the relatively slow growth in wages does have a plus. Inflation is still rising slowly enough that the Fed doesn’t have to rapidly jack up interest rates. A higher cost of borrowing would be especially felt by Americans seeking to buy a new car or home.

The Fed is still widely expected to raise rates in June, but it might only raise them once more in 2018 barring a dramatic upturn in inflation that seems unlikely.

What they’re saying: “The May employment report was strong across the board, with a solid rise in hiring, another drop in the unemployment rate and a 0.3% rise in average hourly earnings. If anyone has any doubts about a June hike, they should set them aside now,” said Chris Low of FTN Financial.